About the Author: Adithya Bellathur

Adithya is a 3rd year undergraduate at the University of Southern California studying Computer Science with a minor in Musical Studies. He grew up in Saratoga, CA and likes to solve problems creatively.

Just a year ago, the world’s radio waves were flooded with the chants of “Gucci Gang”, a viral sensation by Soundcloud rapper Lil Pump. With a runtime of just 2:04, it was the shortest song to ever hit the top of the Billboard Top 100 since 1975, a whole 42 years earlier [1]. Even stranger still, the song eschews the traditional pop song structure. It has only 1 verse, and instead focuses the majority of its runtime on the chorus; a repetitive chant of “Gucci gang” over and over, for a grand total of 53 times during the song [2].

I say this to highlight how successful repetition is in today’s pop music. But is Lil Pump’s sudden success a blip on the musical timeline or should we expect more music like this in the future? Is repetitive music here to stay? As it turns out, Lil Pump is not a unique phenomenon. Pop music has been getting more and more repetitive over the past few decades because the human mind loves repetition, allowing a repetitive song to easily worm its way into the mass consciousness.

HOW TO DETECT REPETITION

The criticism of pop music being repetitive isn’t new. In the the 1970s, computer scientist Donald Knuth wrote an article about how “newfangled drugs” led to simpler music for our dumbed down minds to understand, but the criticism was mostly satirical and not based on fact. In 2017, Collin Morris, an expert in the fields of data analysis, programming, and deep learning, decided to try and quantify whether or not music was in fact getting more repetitive. The result: a resounding yes [3].

How did Morris determine how repetitive a song was? The trick is in the repurposing of an algorithm called the Lempel-Ziv Algorithm, an algorithm that has been used to compress files for years. It works by removing repeating ‘phrases’ in the byte code. If you have ever seen a GIF on Facebook or sent a picture to someone in JPEG form, then you have experienced this algorithm in action. The algorithm works like this: it finds instances of repeating characters, and replaces this pattern with a single reference to the previous instance of repeating characters. For example, the sentence:

“I felt happy because I saw the others were happy and because I knew I should feel happy, but I wasn’t really happy”

This example is very simplified, as Morris did not limit his compression to just words, but also phrases, syllables, and sounds, which may cause us to hear repetition despite using different words. Morris then took this algorithm and applied it to pop song lyrics, figuring out how much each song could be compressed. In theory, songs with lyrical repetition will be more compressed than a song with no repetition.

A COMPRESSED VIEW OF POP 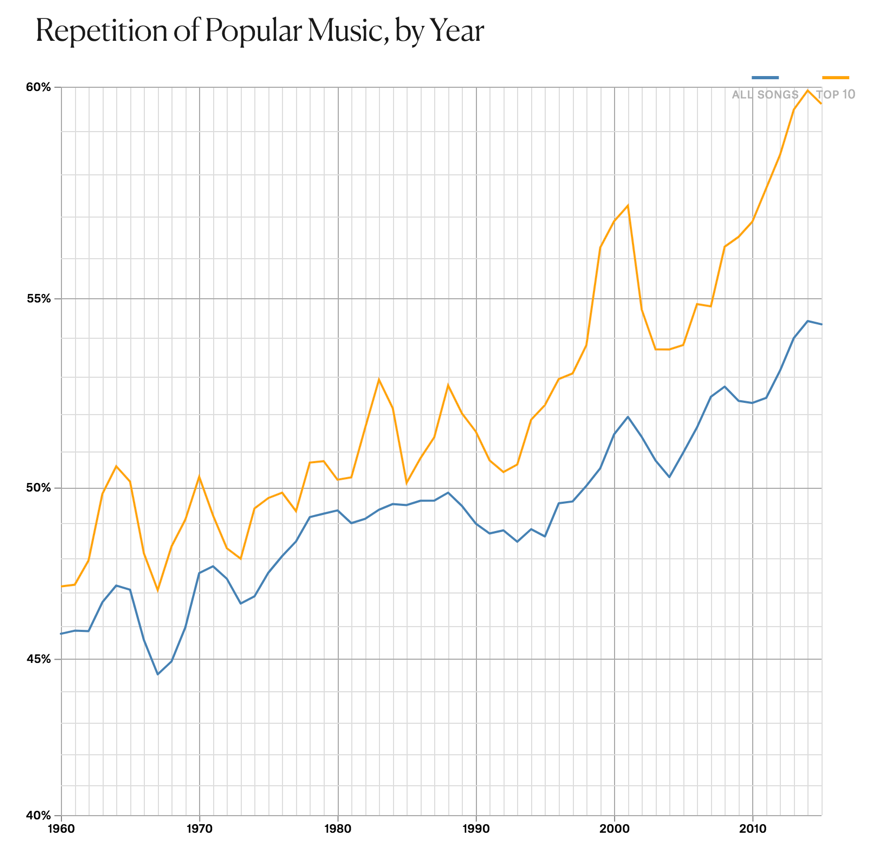 Even more telling is the fact that songs in the Top 10 at some point during the year were anywhere from 3-6% more repetitive than the average song. At no point between 1960 and 2015 were the Top 10 pop songs less repetitive than the average song. There is a clear correlation between repetition and success on the pop charts, which can only lead to the conclusion that pop songs are relying more and more heavily on repetition to catch on [3].

This pattern is also true within the realm of pop singers. The most repetitive artist Morris researched was Rihanna. Her songs on average, could be compressed 65%. Some of her biggest hits were compressed even more; “Diamonds” (76%), “Pon de Replay” (76%), and “B**** Better Have My Money” (66%) are some of her biggest hits, and also are more repetitive than the average song. His research doesn’t include her most recent album, which contains one of her most successful (and repetitive) songs, “Work” [3].

The artists close behind her on the repetitiveness scale are also best sellers. Beyoncé (60%), Britney Spears (60%), Michael Jackson (57%), Justin Bieber (55%) are all some of the best-selling artists of the past few decades, as well as some of the most repetitive [4]. Clearly the fact that repetition makes for successful modern pop music is not just a coincidence, but a definite trend.

IT’S ALL IN THE MIND

Morris’ research wasn’t the only one of this kind. USC professor Joseph Nunes spoke to NPR in 2015 about what makes a successful pop song. His research, which covered over 2,400 songs over 50 years, lead to the same conclusion: “repetition in music is better” [5]. There were other factors linked to success like background choruses and guitars, but the main factor was repetition.

Why does this correlation hold so well? What is it about repetition that gets to us? Professor Elizabeth Hellmuth Margulis of the Music Cognition Lab at the University of Arkansas wanted to get to the bottom of this. She and her team took the music of “composers who intentionally avoided repetition in their works” such as Luciano Berio and Elliot Carter and used modern music editing tools to splice and loop the music, artificially creating repetition in music that did not have it before [6]. She then presented both versions of the music to participants. When asked which of the two clips, the original or the spliced version, listeners preferred, the majority selected the spliced and looped version, stating in a follow-up interview how the music sounded like it was more likely to be “composed by a human artist” as opposed to being “generated by a computer” [7]. This was quite surprising, as Margulis described the spliced versions her team concocted to be “fairly cringeworthy”, considering they were butchering the work of some of the brightest and most celebrated minds in music [7]. These results held true regardless of musical background, as both college students with no musical background and professional musicians in the Society for Music Theory responded to the spliced versions positively. Professor Margulis used this experiment to conclude that the human mind considers repetition “human” [6]. We as humans seem to instinctively connect repetition with human music, to the point where we find music without repetition to be less ‘musical’ than music that has been looped. She said that the “handprint of human intent” in music is rooted in the music’s repetitiveness [6]. This phenomenon shows just how deep our connection to repetition in music holds.

Humans are psychologically attuned to repetition, and it causes us to pay attention to repetitive pop music. In fact, in her essay “One more time”, Professor Margulis states that repetition is one of the few universal features about music [7]. It has the ability to turn things that are decidedly not music into music. There is an aural illusion called the “speech-to-song illusion”, which says that a phrase repeated eventually goes from sounding like speech to something with a beat, like music [8]. Professor Vitevitch from the University of Kansas, who directed research into this phenomenon, says that it is because “our brains’ word-detectors get tired out: when words are repeated in a loop, we stop being as aware of them” [8]. The mechanism our minds use to detect words is a high intensity process, so it only works during short, intense periods of focus. Our detection of syllables and rhythm is much more low energy, so according to Vitevitch it still keeps working long after we ‘turn off’ our ‘word detectors’. It makes the repeated words become a rhythm to our brains [8].

What all of this means is that the human connection to repetition runs deep. We have plenty of research that shows how our minds are extremely sensitive to repetition, and how much we enjoy it. Therefore, it only makes sense that music that is repetitive becomes popular. Record labels and pop artists are not ignorant to this fact. While years ago they may not have had this research, they no doubt realized what worked and continued to utilize this knowledge in their songs. Pop music is getting repetitive for a reason: it sells.

While the repetition is a big part of what makes a successful pop song, it is by no means the only thing. Spotify creates a ‘fingerprint’ of songs which consist of a set of values rating loudness, energy, danceability, acoustic-ness, and valence (cheerfulness). According to Spotify, successful summer pop songs all have a very similar fingerprint, focusing on danceability, energy, and loudness. It is a different set of characteristics than what we have considered here, but by no means less important [9]. 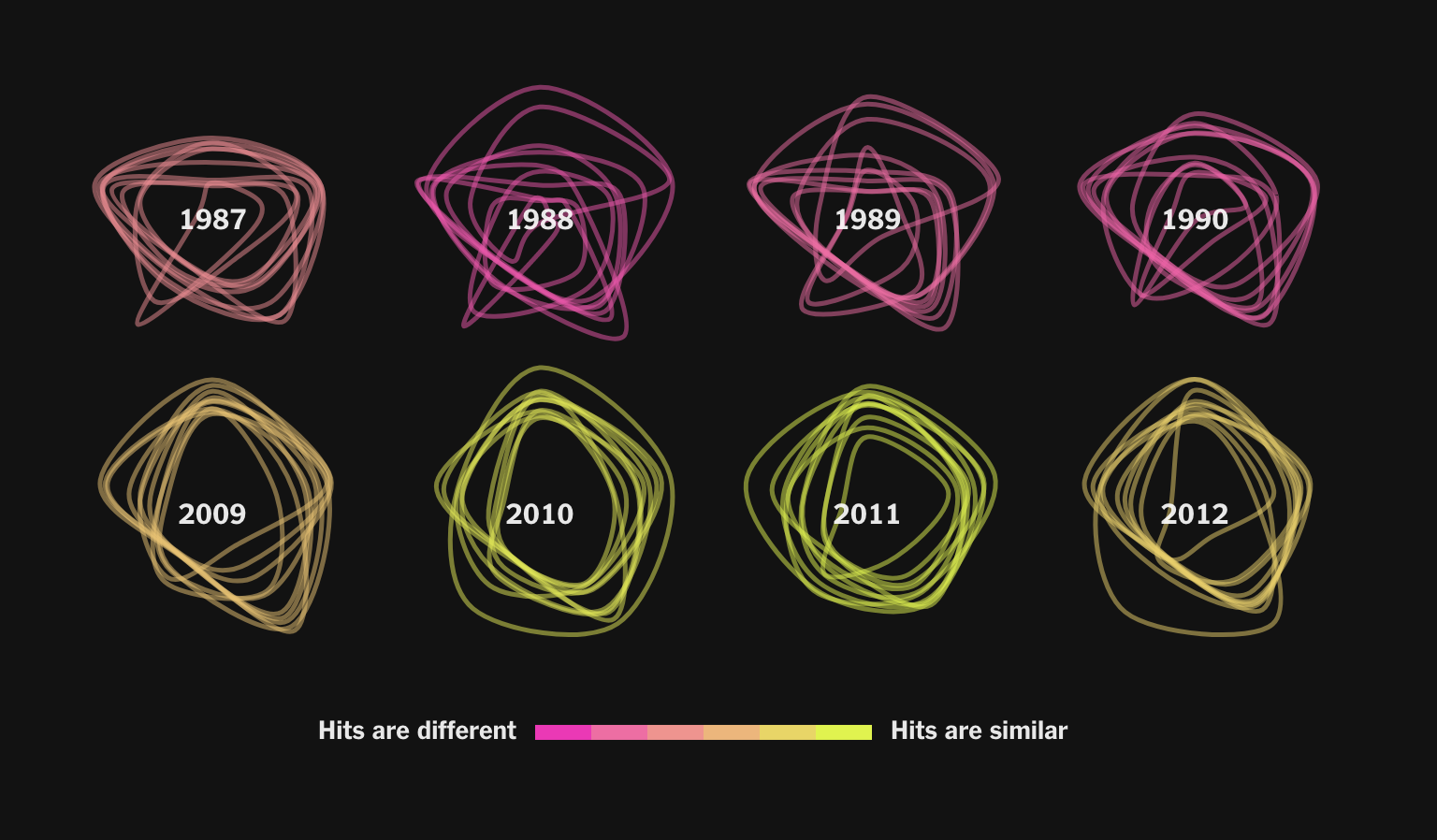 In the research conducted by USC Professor Nunes, other major factors for making a successful pop song included the existence of backup choruses (to sing along to) and a clean electric guitar [5]. These commonly-used elements in pop music give our minds an approachable sound to latch onto and directly lead to an increase in enjoyability in listening to the pop song [5].

Another possible reason pop music has gotten more repetitive is that pop music in the last two decades has being written by a select few people, an inner circle of accomplished song writers. The most famous example of this is Max Martin, the Swedish pop songwriter who has written 22 songs that have reached Number 1 on the Top 100 from 1999 to 2016 in collaboration with artists like Britney Spears, Justin Timberlake, Katy Perry, and Taylor Swift. In fact, from 2008 to 2016, there was not a single year where at least one song written by Martin didn’t top the charts. His songs are instantly recognizable; “…Baby One More Time” (Britney Spears), “I Kissed a Girl” (Katy Perry), “California Gurls” (Katy Perry featuring Snoop Dogg), “One More Night” (Maroon 5), “Roar” (Katy Perry), “Shake It Off” (Taylor Swift), “Blank Space” (Taylor Swift), and “Can’t Feel My Face” (The Weeknd) are just a few of his songs [10]. This run is incredible, and the trend of repetition may be attributed to his unparalleled influence almost as much as to our psychological makeup.

Humans have a fascinating connection to music. It has been at the center of many rituals in society for centuries, and nearly every culture in the world has developed its own form and style of music. Now, millions of people tune in every day to radio and streaming services to listen to music. For a particular song to become successful, it has to be loved by millions around the world. Achieving this ‘perfect’ sound has been the goal of pop music creators for years, and only recently, through advances in data analytics, are we truly understanding why a certain song is successful. Repetition is at the core of all of these discoveries, and the correlation between music and repetition cannot be ignored. In fact, this connection runs deep in our biological makeup and is giving us a new understanding of how our minds work. Our minds love repetition, and this love is reflected in the pop chart. Like it or not, songs like “Gucci Gang” are here to stay.