About the Author: Zhongjie Cai

Zhongjie is a student majoring in Chemical Engineering at USC. He has been playing badminton for over 11 years with 7 years of training experience and 2 years being the President & Team Captain of the USC Badminton club. This is his first essay about badminton.

Badminton Smash is a shot that demonstrates the player’s ultimate power and control. There are certain things that can help nonprofessionals smash like professionals. These things will be discussed in detail in this essay. 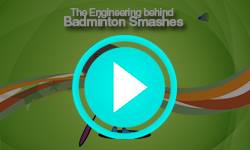 illumin.usc.edu
The Engineering behind Badminton. (Flash)

Badminton is a racket sport like tennis, except that a bird (also called shuttlecock, shuttle, or birdie) is used rather than a ball. Because of the extreme power and speed, a smash is probably the most exciting moment in a game.

A smash is a shot hit with power and speed downward to the opponent’s court, similar to a tennis serve [2]. But how much power can a smash generate? A group of people in Beijing did an interesting experiment: A watermelon was put on the table without a holder (so the watermelon could freely move when hit) and a badminton player hit a bird as hard as possible at the watermelon from about 10 feet away. The watermelon was cracked [1].
From Newton’s law we know that F=ma, where “F” is the force, “m” is the mass of the object and “a” is the acceleration of the object. So the force applied by the bird on the watermelon is determined by the bird’s mass and its negative acceleration when in contact with the watermelon. Since birds have very similar mass, speed will be the key to exert such high force because higher speed will require higher deceleration and therefore the “a” variable will be larger which will yield a higher “F”. To offer a general sense of how fast a bird can be, here is a comparison made between badminton and other sports: The record baseball pitch is 108 miles per hour (mph) by Nolan Ryan; the record tennis serve is 163 mph by Samuel Groth; and the record badminton smash is 208 mph by Fu Haifeng [9].
There are many factors that can affect the speed of a smash: the bird, the body movement, and the racket. As people on the court will be using the same bird and our discussion mainly focuses on how one can perform a better smash than others, the bird’s condition and property will not be discussed. The movement of the body plays the major role in determining how effectively energy is transmitted from the player’s body to the bird.

The body movement influences the energy flow and the timing of contact. A good form of smash is crucial to accumulate the power of the body and release it as a whole in an instant; hitting the bird at the best point of contact, called the sweet spot, also plays an important role in the energy transmission process.

It takes months of practice to learn to exert the power of the body onto the bird and additional months of practice to develop accurate aim: make it go downwards and over the net. To maximize the speed of a smash, the main body needs to work together to generate and deliver power into the shot. The energy starts from the foot and transfers to the waist, shoulder, arm, forearm, wrist, and racket head. Among these intersections, the waist, the forearm, and the wrist need to be twisted.

Below is an illustration of smashing and the energy flow:

○1: Energy is concentrated in the right leg. Raise the left arm to keep balance.
○2: Energy slowly transmits through the leg upwards.
○3: Hold the arm back to maximize the distance the wrist travels before hitting the bird. Energy transmits to the hip and body weight shifts to the left foot.
○4: Swing the arm as quickly as possible and twist the wrist to further enlarge the linear speed of the racket. Energy transmits from the hip to the wrist and body weight completely lies on the left foot. (The twisting in this part will be further discussed below)
○5: After hitting, relax and let the arm finish the swing and end up at the side of the body. This allows the energy be consumed by the body, not the wrist or elbow, so that the energy left will not hurt the joints.

illumin.usc.edu/illu​min.usc.edu
Figure 1: Twisting of a Swing. Starting from ○3 in Fig. 1, there is twisting associated. Fig. 2 illustrates the direction of the waist twist. The body should be twisted such that the direction the chest faces is perpendicular to where the bird comes. When a bird comes and one starts to smash, take the shoulder joint as the pivot and initiate the twist while holding forearm relaxed. Then an intersection stage will be reached [7]. At the intersection stage the palm should face to the left (for right handers). Right afterwards, take the elbow as the pivot and twist the forearm as well as stretching the forearm such that 1) the whole arm is straight and fully stretched; and 2) the palm faces to the front. Lastly press the wrist to make the bird go downwards. The twists all contribute to the final velocity of the racket head. This whole process is like slashing a whip. When the slashing begins, energy transfers from the handle to the whip tip and the energy explodes on the target. Body rotation is the process of slashing and energy transfers from the waist to the shoulder, arm, forearm, wrist, and racket head.

While playing one uses the racket head to hit. But there is a certain region where one can get the best power transmission (from your body through the racket to the bird) and most precision, and that region is called the sweet spot (also known as the sweet zone).
When the bird hits in this region, the force will be more equally spread than when it hits outside of the region[3].
[image=1302 file=”5.jpg” placement=”center”]F​igure 3: Racquet Sweet Spot.[/image]Therefo​re, the racket will hold its direction without tilting, which will result in better precision. If the bird lands outside the sweet spot as Fig. 3 shows, the force will be spread unequally. This unequal force spreads on the frame will cause the racket to tilt. For example, the racket will slightly tilt to the right. This unwanted tilt, which is usually unnoticeable, will lead to bad precision [4]. Below are two more clear illustrations: As Fig. 5 shows, if the point of contact is outside the sweet spot (colored red in Fig. 4 and Fig. 5), the force exerted by the bird will not equally spread and thus will cause the racket to tilt. As the bird is not hit perpendicularly, some power of the racket will be lost. Also because the bird is very light, such a small tilt will ruin the aim. And that’s why in badminton a single centimeter matters.

The string tension is also of crucial importance because it directly relates to the elasticity of the string, which is a property that determines how much energy can be transmitted to the bird. The tension is the force applied on the string: the higher the tension, the tighter the string. The string is elastic so the force it can generate can be quantified using Hook’s law, F=kx (where “k” is the stiffness of the string that depends on the string material and the original length of the string and “x” is the length of the string elongated) [5]. The higher the tension, the shorter the string that will be needed to cover the whole racket head, which decreases its original length and enlarges the “k” value [6]. As a result, compared to using string with lower tension, one can expect to use more power to make the same deformation if the tension is higher. Higher string tension also prevents elastic energy from being stored in the string. Therefore, more energy will be lost if higher string tension is used. Imagine using a wooden board to hit the bird. Without enough elasticity of the board, the bird will not travel quickly. If amateurs use tight strings they can expect the same result [7]. It is recommended to pick one with less tight string first and then tight the string up by one pound at a time to find the tension that suits you the most. Usually 23 pounds will be good for most male players while 21 pounds will be good for female players [8].

Everyone has the potential to crack a watermelon with a smash. You can buy a racket and string it with tension appropriate to your liking, and then you can practice the smash process without a bird. Yes, without a bird. This will give you muscle memory of what you should do to smash; without this it is very easy for your smash process to deform at any instant and therefore result in an unsatisfactory smash. After your smash form is solid, you may start using birds. At first it may be hard for you to hit the bird at all because you may never have practiced hitting a moving object. But trust me, a player with 7 years of training experience, you should ensure that you can keep your form of smash at every single moment before you practice with a moving bird. The form will definitely serve as the foundation to making your way to cracking a watermelon.