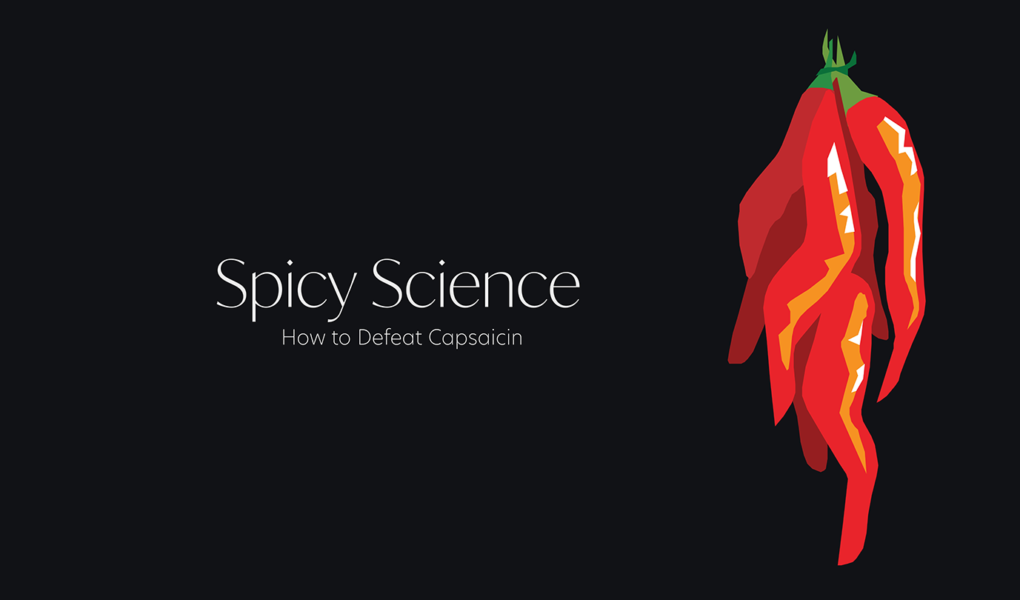 About the Author: Shee Eun Park

Chili peppers can be found everywhere, incorporated into colorful dishes across continents and around the world. They have also been analyzed by scientists in various ways: the factors that influence the degree of pungency, the evolutionary theories behind their spicy nature, ways to measure their spiciness levels, how humans detect their spiciness, and effective ways to deal with the spiciness. Altogether, these scientific studies provide further insight into the chemistry and biology behind the spicy nature of chili peppers and their effects on human physiology.

If you’re like me and are guilty of having watched too many “Hot Ones” videos on Youtube while procrastinating, or if you’re always scrolling through Instagram on the lookout for the next “hot” spicy dish, you’ve probably wondered at some point: how can one get better at eating spicy food? To get an accurate picture of how our body is able to handle the pain that comes with consuming spicy foods, we have to delve deeper into the science, specifically the chemistry and biology, behind the most common spicy ingredient used in countless dishes across a diverse array of cuisines: chili peppers.

The word chili, or more accurately, chile, dates back to the ancient Aztec civilization; it is a derivation of the word “chiltepin” from the Nahuatl dialect [1]. It is native to the Americas, and most likely traces its roots to the Bolivia-Peru region [1]. The first historical recording of the consumption of wild chili peppers dates back to around 7500 BCE [1]; historical evidence also suggests that the first domesticated peppers date back to around 5000 BCE [1], making the chili pepper one of the first domesticated plants in Mesoamerica. Aztec and Inca civilizations were the first to incorporate chili peppers into their dishes and culture, and chili peppers were eventually introduced to the rest of the world after Christopher Columbus’s discovery of the Americas [2].

Chili peppers have multiple names, such as red chile, paprika, and cayenne pepper, and belong to the genus Capsicum, under the family Solanaceae, which includes potatoes, tobacco, and tomatoes [1]. The chili pepper is popular among cultivators because it is a short duration crop and is able to be cultivated in various climates around the world [1]. Ideally, though, chili peppers have been found to grow best in hot, dry weather and in soil that is well-drained, silt-loam, or sandy [1]. Fig. 1 Anatomy of a Pepper

If you are familiar with spicy chili peppers, you will also probably know how to strategically avoid the spiciest part of the fruit, which is the placenta. There are numerous studies that demonstrate that capsaicin concentration is higher in the placenta than in the pericarp [1]. The placenta is the part of the fruit that the seeds are attached to, and the pericarp is the exterior of the fruit, as shown in Fig. 1. This is because the placenta is the heart of where the capsaicinoids, or the chemical compounds associated with the spiciness of the chili pepper, are synthesized [1]. The pungency of a chili pepper can depend on several environmental factors, such as temperature and light exposure [1]. For example, higher night-time temperatures could lead to an increase in capsaicinoids, making the chili peppers spicier [1]. Another factor that affects the pungency of a chili pepper is light exposure, and studies have shown that chili peppers exposed to continuous light post-harvest increase in pungency [1].

But why are chili peppers the way they are? There are several interesting theories on why chili peppers evolved to take on their spicy identity, one of them being to increase the chances of their seeds’ survival against the dangers of mold [3][4]. From close observation of wild chili peppers, researchers discovered a positive correlation between the population of spicy peppers and the number of insects called Hemiptera in a specific area [3][4]. These tiny insects would use needle-like tongues to create holes in the fruits through which they would consume its juices [3]. Eventually, these holes cause mold to form on the peppers’ seeds, which would lower the seeds’ chances of survival [3]. As a result, peppers gradually developed antifungal properties through capsaicin to increase their species’ chances of survival. Humans also recognized these antifungal properties and used them as natural food preservatives before the invention of refrigeration [4].

How do we measure Spice Levels?

The Scoville scale is the most well-known scale used to measure how spicy a chili pepper is. Spice level can range anywhere from 0 to15 million Scoville units and is calculated by finding the ratio of chili pepper to water where the taste is no longer detectable. For example, one gram of the spiciest chili pepper in the world, The Dragon’s Breath, would have to be diluted in 2.48 million grams of water for the spicy taste to no longer be detectable [5].

Table 1. The Scoville Heat Units of the most well-known chili peppers

Over time, scientists have come up with alternative empirical methods that serve as more scientifically accurate replacements of the Scoville Scale. In these methods, chili peppers first go through a process where its capsaicinoid compounds are extracted. Then, they go through different chromatography techniques, the most common of them being the high-performance liquid chromatography (HPLC) [6].

HPLC is a form of chromatography, a method which separates chemical components in a mixture, in this case the capsaicinoids of a chili pepper. Typically, the liquid sample to be used in chromatography is made up of two things: analytes and a matrix [7]. Analytes are the molecules of interest, the capsaicinoids, and the matrix is the remaining parts of the sample [7]. Inside a chromatography machine, the liquid sample is forced through by a pump into a mobile phase, which means a moving fluid, and passed through a stationary phase, which is a transitory state between a liquid and a solid, where the capsaicinoids are separated from the rest of the sample [7]. Then, this data is translated into a chromatogram, similar to a line graph, which displays the quantity of capsaicin.

The Scoville scale provides a more traditional and simple definition of spice levels, whereas the advanced chromatography techniques use chemistry to describe the compounds that make up a spicy pepper. These chemical-level representations of capsaicin content can be used to support scientific studies that examine the effects of capsaicin on physiological and mental health and to explain why certain peppers score higher on the Scoville scale than others.

Measuring spice pungency scientifically offers a general idea of which peppers are the spiciest, but does little to form a comprehensive idea of their effect on human senses. The physiological aspect of spiciness all starts with capsaicin receptors, which are protein channels located in the outer membrane of nerve cells in the tongue and mouth that sense the presence of capsaicin [8]. When capsaicin is detected, these capsaicin receptors allow a flood of calcium ions to enter the nerve cells [5]. This process of flooding excites the nerve cells and causes a burning sensation, the same sensation that we feel after eating a spicy chili pepper [5,8].

This capsaicin receptor also goes by the scientific name Transient Receptor Potential Vanilloid 1(TRPV1), and is part of the superfamily of sensory-related ion channels called the Transient Receptor Potential (TRP) channels [5,8]. These TRP ion channels, also found in insects and fish, were first isolated in humans in 1997, a revolutionary discovery that helped scientists begin to understand how humans sense spiciness and its interconnectedness to sensing heat. Generally, TRP channels help with detecting the senses such as vision, taste, and olfaction, and also with detecting mechanical stress such as stretching, pressure, and most importantly, temperature [8]. So far, scientists have detected at least 5 other thermo-TRP channels (TRP channels sensitive to temperature) in addition to the thermo-TRP channel TRPV1, the one responsible for detecting capsaicin. Each of these channels responds to different ranges of temperature [8]. For example, one channel, TRPV2 is activated at temperatures above 52 degrees celsius, while another channel, TRPM8 is activated at the much lower temperature of negative 25 degrees celsius.

Studies have shown that without the TRPV1 receptor, we would not be able to detect spiciness, but would still be able to sense heat. In addition, TRPV1 is only activated by foods containing capsaicin and camphor; other foods that are known for causing similar spicy sensations such as garlic, horseradish, and cinnamon activate a different thermo-TRP channel, TRPA1 [8].

Overall, TRPV1 and its role as a thermo-receptor channel provide explanations to why the sensations of heat and spiciness feel similar, since both stimuli activate the same sense receptors. It also provides insight into why some react more strongly to capsaicin than others; the threshold for activating taste bud cells through TRPV1 based on spicy stimuli are different depending on each person. This may explain why scientifically recorded spice pungency levels result in completely different physical reactions between different people [9].

Our Best Bet: Milk or Sweets

Despite capsaicin’s tendencies to cause unpleasant and sometimes painful sensations for some, for others they contribute to an enjoyable and desirable culinary experience. For those that lack a natural talent for handling spicy foods, one method towards acquiring an appreciation for spicy foods is by canceling out capsaicin with palate cleansers. Palate cleansers are foods that can bring the mouth to a more neutral state [10]. For example, milk is commonly used to soothe the tongue from the burning sensation caused by capsaicinoids because of its fat content. Other possible palate cleansers include beer, chocolate, sour cream, and sugar water, or other foods and beverages that contain calcium.

According to one study conducted by Fibrianto, Nurdiani, Puanda, and Wulandari in 2019 on the different types of palate cleansers, the effectiveness of these cleansers vary depending on its state, whether it is liquid or solid, and its temperature. Based on the results, milk is the most effective palate cleanser because its non-polar fat compounds are capable of binding to and dissolving capsaicin molecules on the tongue [10]. This is because of the lipophilic nature of capsaicin; capsaicin prefers to be in the fat phase instead of the aqueous phase which decreases the number of capsaicin molecules left to bind with the TRPV1 receptor on the tongue [11]. In general, liquid palate cleansers are more effective than solid ones, and palate cleansers at colder temperatures are more effective at neutralizing pain receptors. This is because TRPV1 is also activated by high temperatures; hence, lowering the temperature with cold milk is effective at neutralizing spiciness [10].

Another method, the context effect, builds on the idea that having a positive attitude towards capsaicin can be an effective way to handle spicy foods in the long run [12]. A repeated consumption of spicy peppers can help alter the threshold that an individual considers spicy based on their mindset. Regularly consuming more spicy food can turn previously unpleasant experiences into pleasant ones. This can help people enjoy spicy foods more regardless of their genetics and predetermined spice tolerance levels.

Although genetics, such as having fewer capsaicin receptors on the tongue, play an inevitable role in determining one’s ability to deal with spiciness, using methods such as palate cleansers can help reduce the painful sensations caused by spicy foods. Other methods, such as building a tolerance to spicy foods through the context effect, can also help with handling spicy foods. The next time you’re eating something spicy, whether it’s by accident or by intention, and need an effective palate cleanser, you can think about how milk will neutralize that feeling of spiciness and know that this phenomenon, as well as the science behind spice, can be explained through some analytic chemistry and simple biology.

[12] K. Nico, “Do you feel the burn? the science behind your spice tolerance,” The Dish on Science, 23-Jun-2021. [Online]. Available: https://thedishonscience.stanford.edu/articles/do-you-feel-the-burn-the-science-behind-your-spice-tolerance. [Accessed: 14-Dec-2021]. 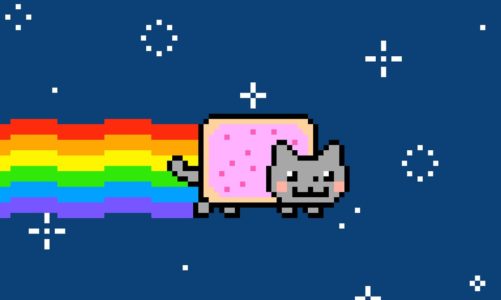